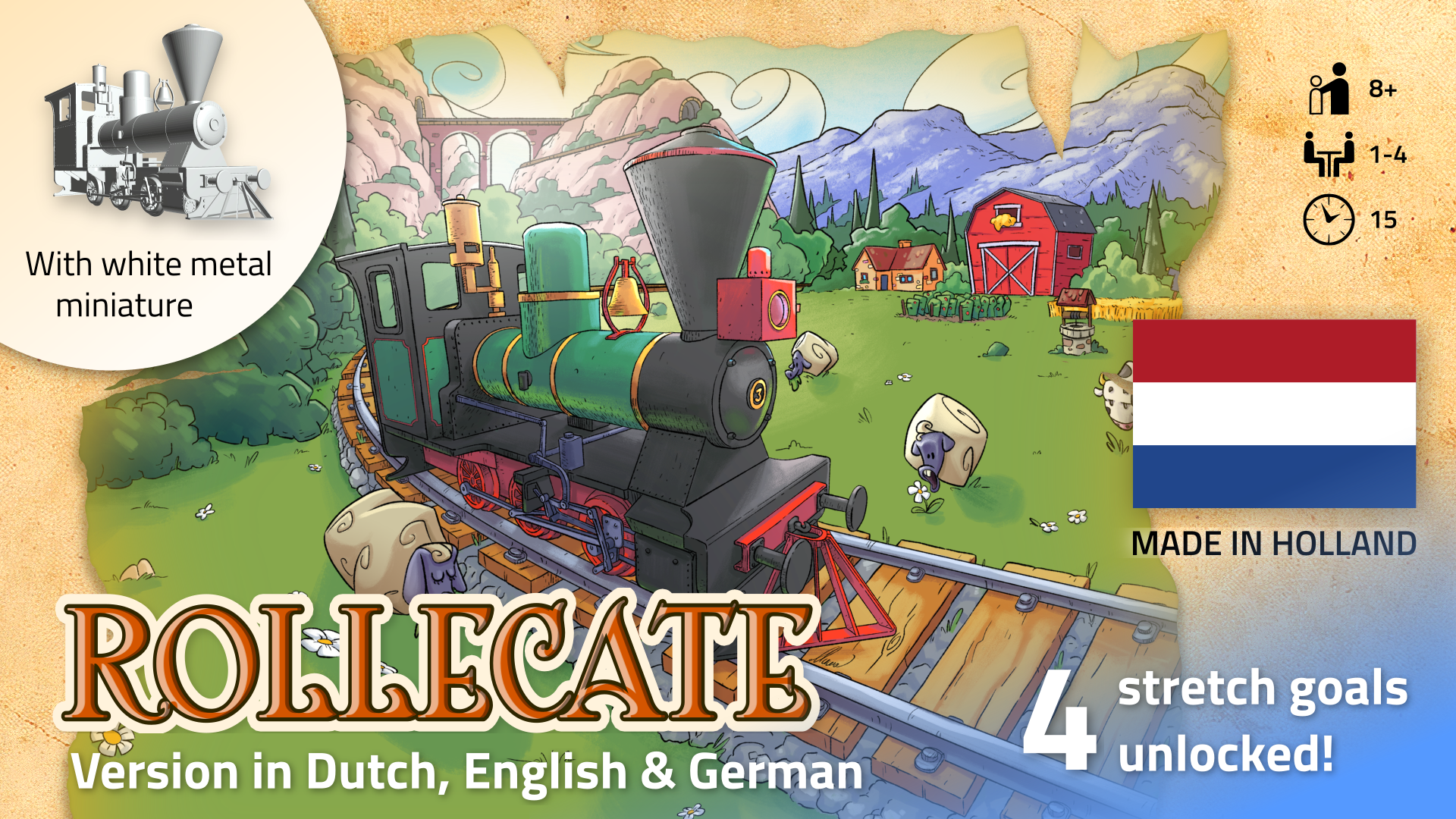 Good evening everyone. Rollecate is very close to the 4,500 euro line, which means the Antique look stretch goal has almost been unlocked! Thank you very much for your contributions. Just a little more to go!

Last time, we promised to show you a little more of the process of making the mould for the first white metal train. As you may remember, the first generation of miniatures is used to base the actual production moulds on. To make sure as much detail is copied from the plastic model #0, a different alloy is used, consisting of 50% Tin and 50% Bismuth. This metal is more fluid than the regular white metal alloy. But it is also more brittle, causing it to break easily.

On the picture above, you see the master mould. It is made by immersing the plastic #0 miniature in silicone. The resulting mould still needs some work: channels are carved by hand, both for the fluid metal to enter and air to leave. Once the mould contains all the necessary channels, the very first metal train could be cast. This memorable moment was caught on camera...


So there it was, the very first copy of mini-Rollecate in white metal. From here on, a further 10 copies were made and hand-detailed. These mother trains were then used to create a production mould.

With the production mould ready, we are now all set to start casting the white metal miniatures for Rollecate: the game. A different alloy will be used, mainly consisting of Tin and some Copper and Antimony. This alloy is far less brittle. Although it is still not advisable to drop the miniature, it would actually survive the impact. It might dent, but won't break. Which is quite a difference from the Tin-Bismuth miniature we dropped: it shattered into a thousand peaces. What a shame...

Finally, the photo below shows Michiel casting a first batch of white metal trains. Well, sort of. He didn't quite succeed and the tin was ultimately 'recycled'.

Goodnight. It's been a long weekend. Yesterday we went to De Tinnen Roos to witness the casting of the first copy of the white metal miniature. That is: the first mother copy. In total, 10 such copies will be cast using a special Tin/Bismuth alloy. These miniatures will then be hand detailed and used to produce the final production mould.

We have some really nice footage of the actual casting, but will share that with you tomorrow. Right now we wanted to tell you about something else that is possibly even more exciting. After talking to Ramon Jahn, the owner and master mould maker at The Tinnen Roos, we decided that it would be really cool to try and add a so called 'Antique look' to the miniature.


The above photo shows what the miniature will look like when finished with an antique look (minus the crooked whistle, that is). The process includes an acid bath, polishing and a coat of varnish. Hopefully you agree this finish makes the details stand out more. Still, if you'd like to hand paint the model, that would of course absolutely be possible.

As you can imagine, this procedure requires quite a lot of extra operations to be performed manually. But we think it is well worth the trouble, which is why we decided to add this finish as a new stretch goal. And the good news is: we are already very close to it!

A quick update today. I would like to say the picture below says it all. But you'll probably not be able to make much of it. But let's just try and see how far you'll get:


It looks a little like a giant donut. A pancake perhaps. Could be a pie with a really big hole. But don't let the apparent tastiness of this thing mislead you. It's pure silicone, not something you'd like to put your teeth in.

You're looking at the mother mould. This mould will be used by The Tinnen Roos tomorrow to cast the very first white metal miniature copy of the Rollecate. A few more copies will follow. Using these first generation copies a production mould will be created by the lovely lady on the photo below:


We'll go and visit the factory tomorrow. Pictures will follow!

Today we achieved another milestone: the second strech goal was unlocked! That means all game boxes will not only contain a beautiful white metal miniature train, but the train will be in a protective red velvet bag. It looks really posh:


So now we can start moving towards the third stretch goal: rules summary sheets for all players. Even though the game is not all that complicated, there are quite some little facts that are useful to have in front of you while playing. We plan to include little dice odd charts, for instance.

Today we got word from Kilsdonk that production of the game boxes had commenced. So we rushed in to witness the actual process ourselves. Just too interesting and cool not to go and see. Let's start with some raw footage of the production process:


As you can see, this is not a large scale operation, but involves some honest, skilled workmanship. After the bottoms where formed and glued, it took quite some time to setup the machine for the lids. Too long for us, so we didn't linger around much longer. We took some more photos that you might like. The little montage below should be both soothing and interesting.

Good afternoon! We have some good news. The first stretch goal was just unlocked! Rollecate crossed the 3,000 euro mark, which means we'll upgrade the game box to an extra thick quality card board with a nice, matte black interior. Thanks to everyone who made that happen!

The next stretch goal is 3,500 euro. Hopefully we'll reach that, because that means the white metal miniature train will get a nice red velvet bag to keep it safe in. So, please tell your friends about this Kickstarter!


This afternoon we received a photo of a dummy box just created by Kilsdonk. That is, a bottom. Tomorrow the production process will start, using the heavier quality, black finish cardboard that was unlocked by the first stretch goal.